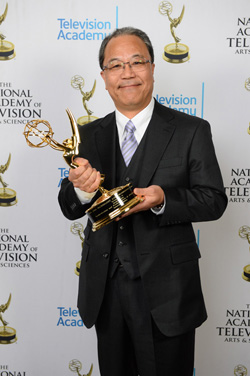 Connecticut, USA – January 13, 2015 – Takatsugu Ono, Chairman & CEO of Media Global Links was on hand to accept the award during the 2015 Consumer and Electronics Show.

Media Global Links, the market leader in broadcast and network transport over IP solutions, graciously accepted a Technology and Engineering Emmy® Award for Standardization and Productization of JPEG2000 (J2K) Interoperability, at the 66th Annual Technology and Engineering Emmy® Awards ceremony, hosted at the Bellagio Hotel in Las Vegas on January 8, 2015.

“To receive this award is a great honor for us, and we are thrilled to have been recognized by our peers and the Academy of Television Arts & Sciences for technical leadership in the media industry,” comments Takatsugo Ono, Chairman & CEO of Media Global Links. “This recognition validates our pioneering work in JPEG2000 standardization for developing best in class video over IP transport solutions. We would also like to congratulate our fellow award recipients on their remarkable achievements.”

The Technology & Engineering Emmy® Awards are presented by NATAS to individuals, companies, or to scientific or technical organizations in recognition of significant developments and contributions to the technological and engineering aspects of television.

Through its pioneering work with the Video Services Forum (VSF), Media Links has been involved in aiding the widespread adoption of JPEG2000 as an interoperable and open compression standard for transmitting high quality content over IP with minimal latency.